During my one year stay in Vienna, I have discovered many beautiful places and took a lot of pictures. Now I want to show you everything that, in my opinion, is worth seeing. Sometimes it will be well-known tourist attractions, sometimes not so obvious and popular sights, but no less interesting on the other hand. I hope you will find on my list some new places to discover or you will discover something new about the places you already know.  So, let’s go on a journey!

1. The Vienna State Opera a must-see in Vienna.

The Vienna State Opera looks stunning, isn’t it? Although there is a dark chapter in its history: two main architects of the Opera suffered a tragic end. The building did not gain the popularity that it was supposed to have gotten during its establishment, so one architect kill himself and the other had a heart attack. Today Viennese are proud of their theatre which is considered one of the most important opera houses. It’s also famous for the annual Vienna Opera Ball. 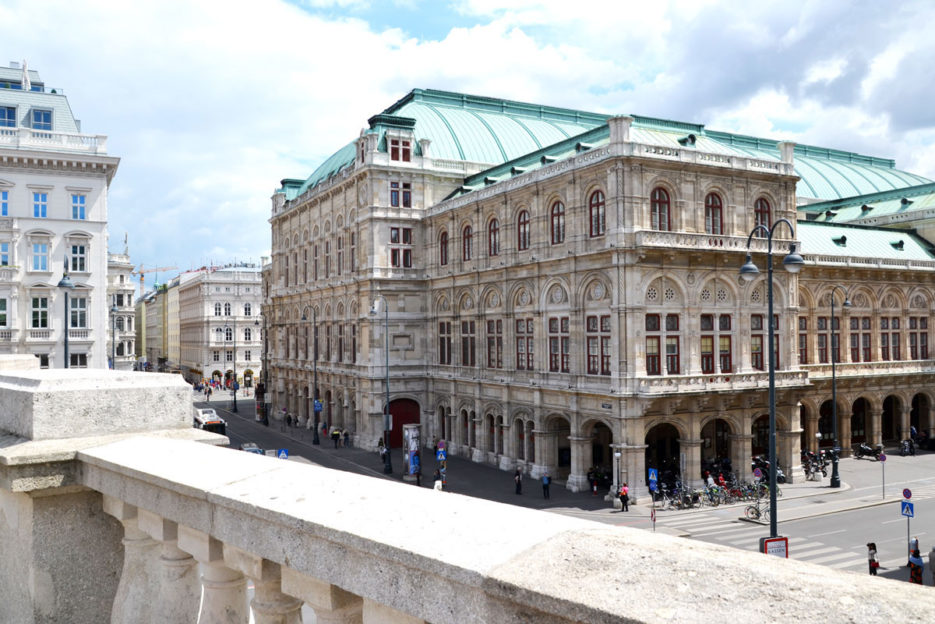 A view of the Vienna State Opera (Wiener Staatsoper) from Albertinaplatz

2. Albertinaplatz, a square near the Albertina Museum.

When you will be on a city walk in the 1st district don’t forget to visit Albrertinaplatz. There is a beautiful view from here on the Vienna State Opera, Hotel Sacher and the streets of Innere Stadt. If you are going to take some night pictures of Vienna, it’s the perfect location! 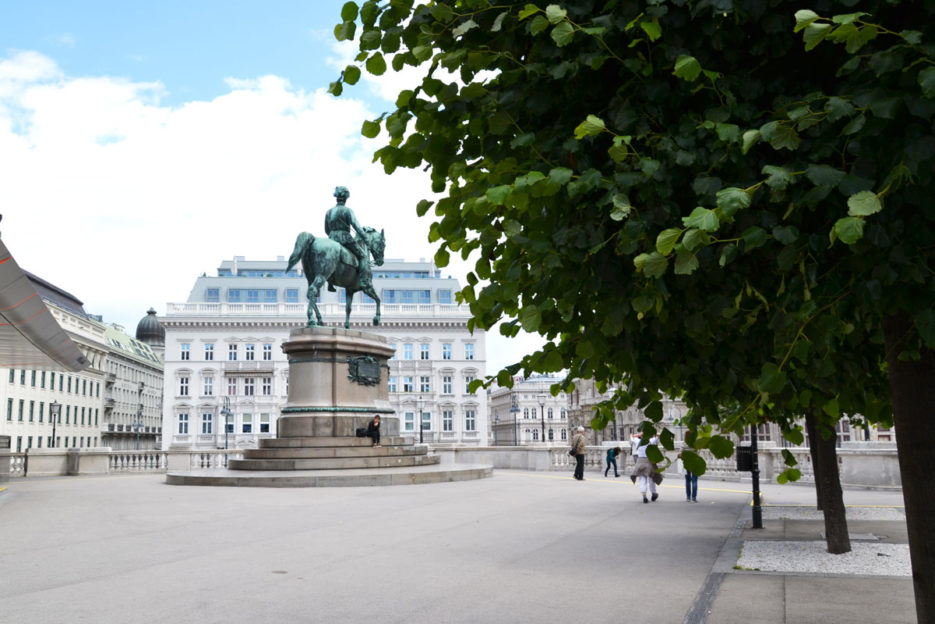 3. Am Hof, a beautiful square in Vienna’s city center.

Am Hof is the oldest and the biggest square of Vienna Innere Stadt. It was used for jousting tournaments and later became a market square. Nowadays the antique market takes place there on the weekends from March to Christmas. 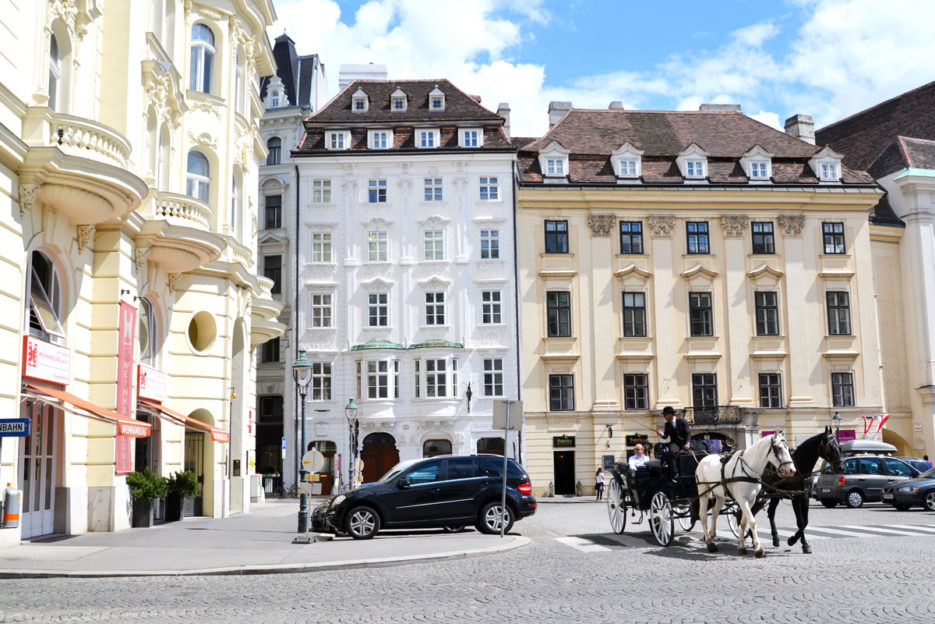 Am Hof, one of the most historically significant squares in Vienna’s city center

4. Radetzkybrücke, a bridge over the Vienna River connecting two districts.

Every time I walked Radetzkybrücke I was enchanted by the view of the Wien river and the Urania building on the other side. This small bridge you can see on the picture below is a part of metro line U4 Heiligenstadt – Hütteldorf, so every 5 minutes you can see trains running above the river. 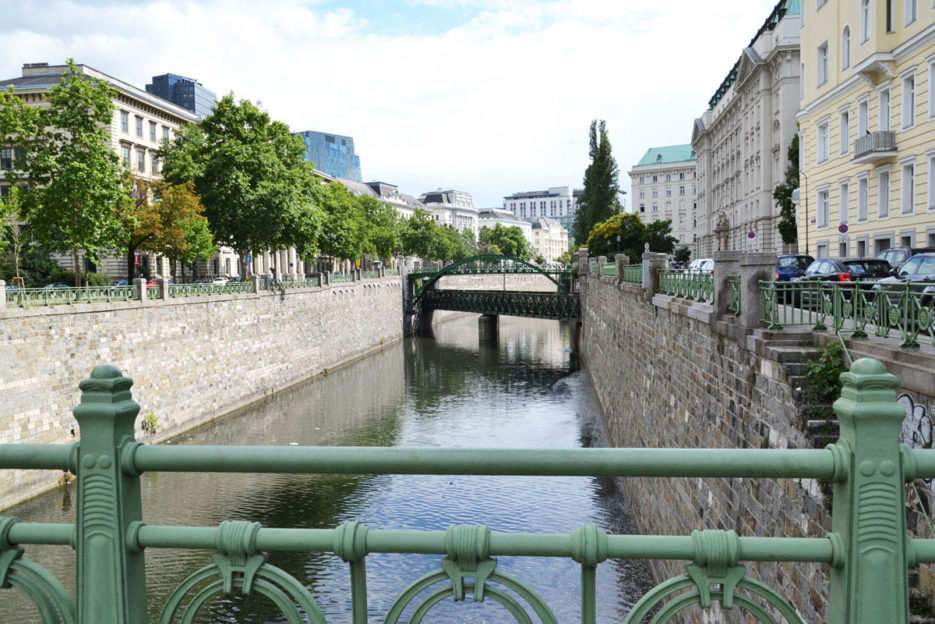 Radetzkybrücke, a bridge over the river Wienfluss that connects the two Viennese municipal districts, Innere Stadt and Landstraße

5. Griechengasse, one of the most beautiful streets in Vienna.

Griechengasse is my favorite street of Vienna. The interesting fact is that the oldest restaurant in Vienna, Griechenbeisl, is located here. 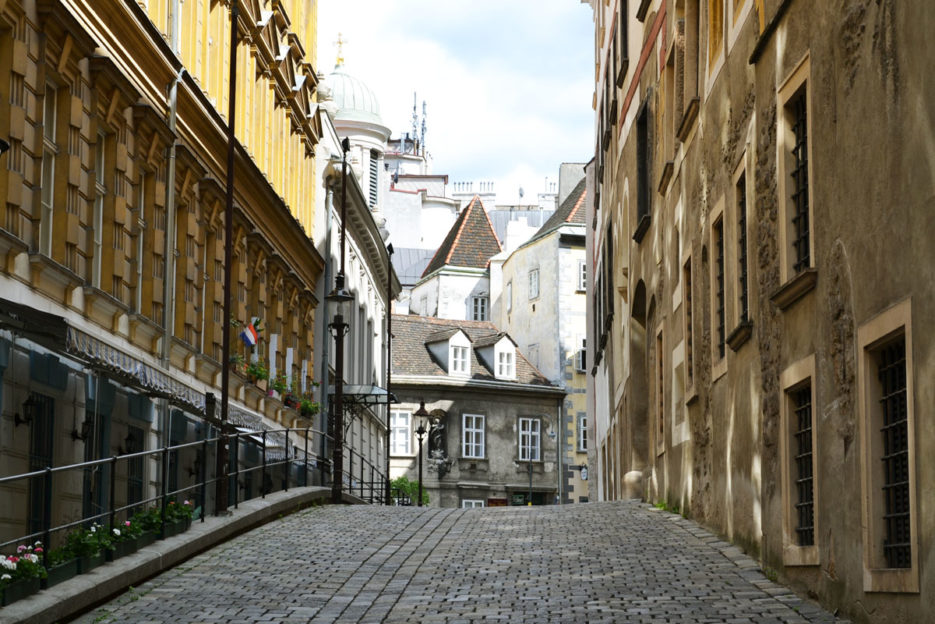 Griechengasse, a charming street in the center of Vienna

During my stay in Vienna, I have met some expats who were confusing KunstHausWien with the Hundertwasserhaus. These two buildings are located in the same district and both are Friedensreich Hundertwasser’s works so sometimes it’s easy to get wrong, especially if you are a tourist and it’s your first travel to Vienna. The easiest way to explain it is the KunstHausWien is the museum of Hundertwasser and located 450 meters away there Hunderwasserhaus is actually an apartment house created by Hundertwasser. If you want to learn more about Hundertwasser and his other works in Vienna, read about the 10 most-strangest buildings in Vienna. 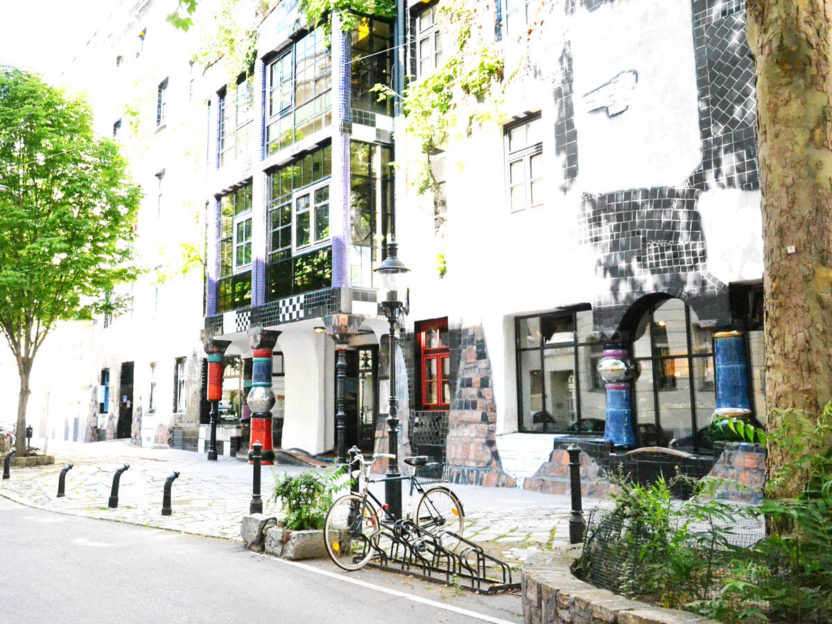 7. Sterngasse, a charming street in the first district of Vienna.

Sterngasse in another charming street of Vienna’s 1st district. Like most of the wonderful places, I have found it… when I got lost. Sometimes it’s the best way to explore the new city. 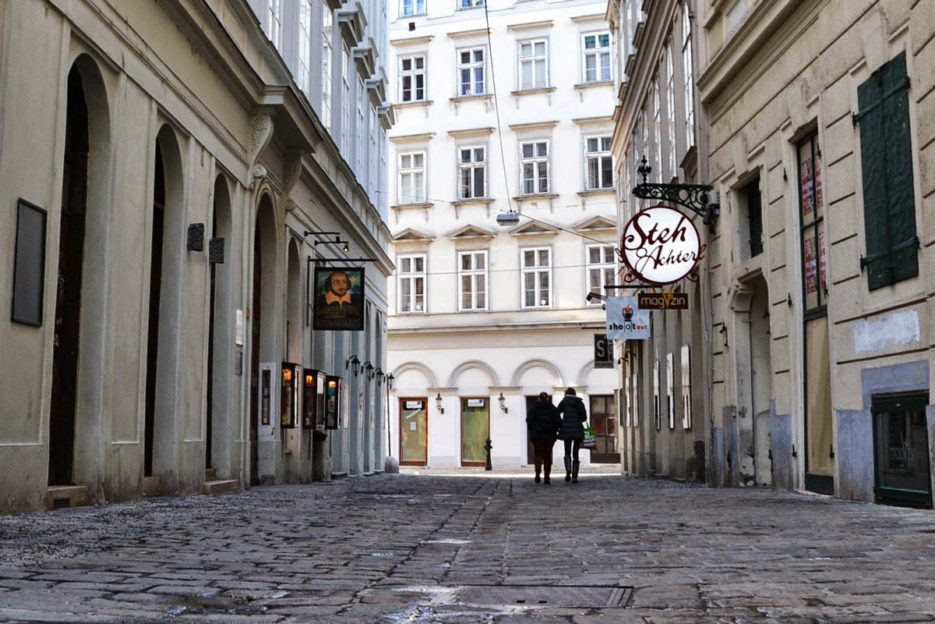 Sterngasse, a charming street in the first district of Vienna

8. Freyung, a square in the old town of Vienna surrounded by beautiful palaces.

Located close to Am Hof, Freyung square is famous for city palaces located there like Palais Ferstel, Palais Harrach, Palais Kinsky… and the Austria-Brunnen fountain which represents four main rivers of the Habsburg Empire: Elbe, Danube, Vistula and Po, each watering in different seas – the North Sea, the Black Sea, the Baltic Sea and the Adriatic Sea. 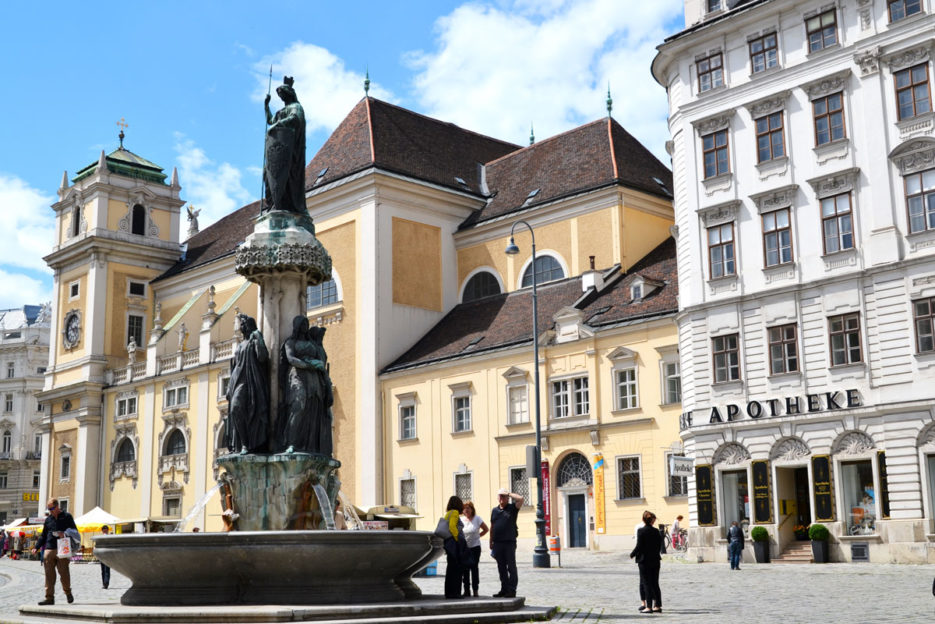 Freyung, one of the largest and most famous squares in Vienna’s Old Town

9. The Freyung Passage, a hidden gem in the old town of Vienna.

The Freyung Passage is located inside the Palais Ferstel. The passage is lined with elegant and exclusive shops, while on the other side is worldwide famous Cafe Central. What’s impressed me most is the central octagonal space and the Donaunixenbrunnen (Danube Mermaid Fountain) which stands there. 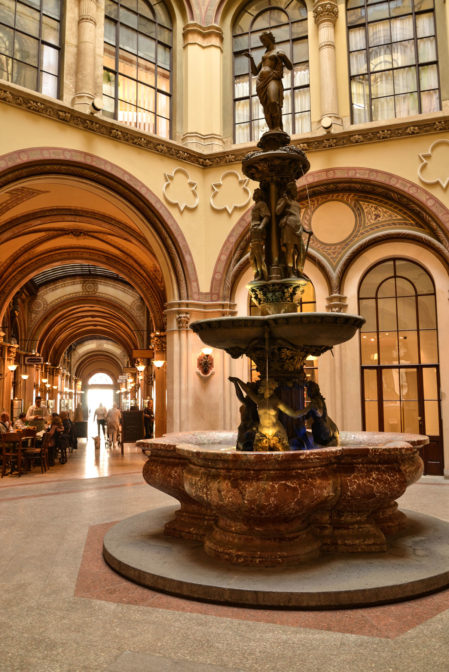 The Freyung Passage in the Palais Ferstel, Vienna

10. Judenplatz, a beautiful square in the old town of Vienna.

Judenplatz is my favorite square in Innere Stadt. Maybe it’s because it’s so quiet, so peaceful… And these amazing buildings that surround it! I discovered it when I was just walking around the Innere Stadt with my camera and got lost… as usual when I find something really marvelous. 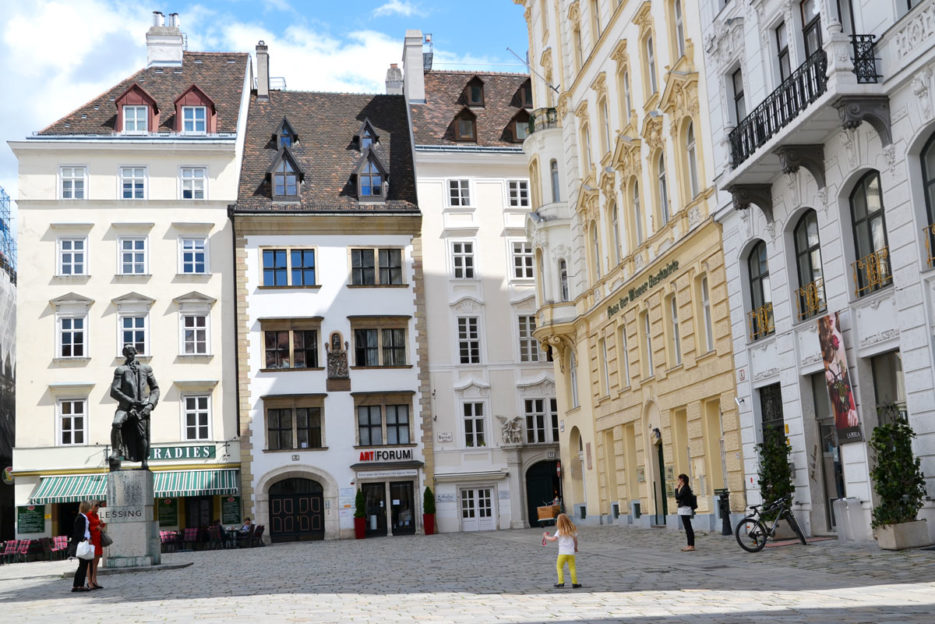 Judenplatz, a beautiful square in the old town of Vienna

4 comments for “10 lovely places to visit in Vienna, Austria”